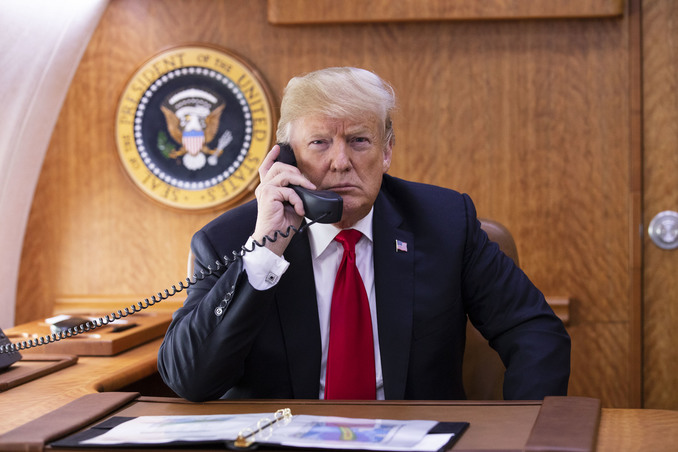 President Trump on the phone with Alabama Governor Kay Ivey in October 2018. A different phone call that the president made in the summer of 2019 is the subject of his potential removal from office.

What It Will Take To Remove President Trump From Office?

In the Summer of 1974, when The House Judiciary Committee passed three articles of impeachment against President Richard Nixon, just over a week before he announced his resignation from office, six Republicans voted “Aye,” along with 21 Democrats.

In the late fall of 2019, when the House Judiciary Committee passed two articles of impeachment against Donald Trump, not a single Republican voted “Aye.”

This just signals the uphill climb that Democrats have in the battle to remove President Trump from office.

When President Donald Trump was impeached by The House of Representatives on December 18th, 2019, he became only the 3rd President in our nation’s history to be distinguished with the byline ‘Impeached.’

The House vote was almost entirely along party lines. Two Democrats voted Nay, and one of them, New Jersey Representative Jeff Van Drew, is soon expected to switch parties and become a Republican.

Democractic Presidential candidate, Tulsi Gabbard, voted ‘Present,’ the only Rep. in the 435-person House to do so. The impeachment process now goes to the Senate, where a trial will be conducted in the New Year and a vote will come on whether or not to remove President Trump from office.

On December 12th, Mitch McConnell, on Fox News, said that he would be coordinating the likely trial in the Senate with Trump’s lawyers.

He also said that there was no way that Trump would leave office. High ranking Republicans in the Senate are looking to get this over with quickly, and they have full control over how fast a potential trial gets completed.

So what is it going to take for Donald Trump to be removed from office?

While impeachment in The House is now a done deal, the Senate is a whole different story. In the Senate, to remove from office, a ⅔ majority is needed. That’s 67 Senators that need to vote ‘Yes’ to remove an elected official from his position.

At the start of the New Year, there are no Republican Senators who have expressed a desire to vote to remove President Trump. There doesn’t seem to be much of a chance of removal, but it’s surely still possible. Just look back at Richard Nixon’s impeachment scandal.

Up until the final days of his presidency, Nixon denied any involvement in the Watergate break-in, similar to the tactic that Trump is taking right now. That was until a “Smoking Gun” tape was released by the White House on August 5th, 1974, with audio of Nixon just days after the break-in discussing how to potentially cover it up. It was clear obstruction, and even Nixon’s staunchest supporters in the Senate agreed.

Just days after, high ranking Congressional Republicans met with Nixon and told him that almost all of his support in the Senate was gone. His resignation went into effect at noon the next day.

It’s clear that at this point that a “Smoking Gun” tape might be necessary to remove Donald Trump from the office of the Presidency. But, even with a revealing tape of some kind, would Senate Republicans potentially abandon their President in an election year and face potential removal from office themselves, through the 2020 Congressional elections?

The variables that are a part of the entire impeachment process are unforeseen and unique in our nation’s history. The story is yet to be told, and it remains to be seen if those variables will match up and lead to the first removal from the Presidency ever, the second resignation of a President ever, or the continuation of the Presidency of Donald Trump for another year, or potentially even another full term.