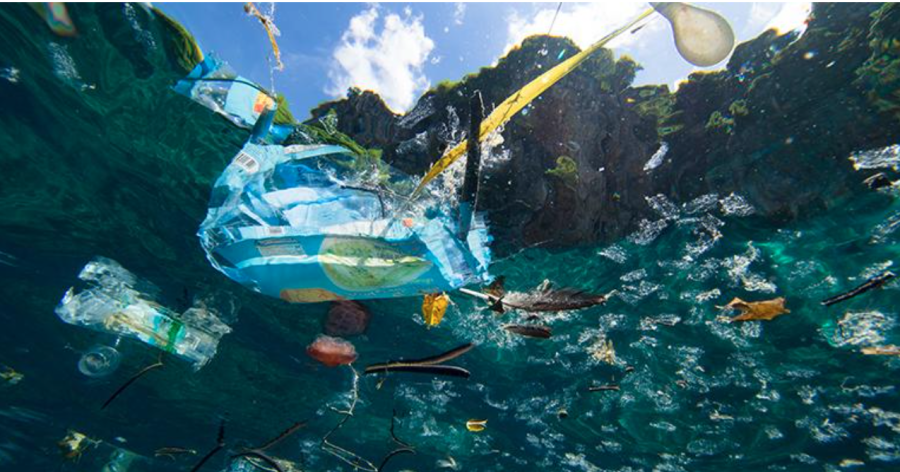 Are you aware that plastic waste in our oceans and on our beaches has become a global crisis?  Plastic has many valuable uses, but the uncontrolled increase in its production and our lack of sufficient ways to reduce or eliminate plastic waste has caused severe consequences to the environment. This plastic waste has ruined many of our beaches, become deadly to marine wildlife, and affected human health. It is important that we address this problem globally and without delay.

Today people produce about 300 million tons of plastic waste each year. It is predicted that by 2050, the world will be producing up to 34 billion tons of primary plastic.  At this rate, the amount of plastic in the ocean is expected to weigh more than all the fish in the sea by the year 2050.

Most of the plastic in the earth’s oceans flows from land. Trash is carried to sea by major rivers which pick up more trash as they move downstream.  Once at sea, much of the plastic trash remains in coastal waters. But once caught up in ocean currents, it can be transported around the world. On Henderson Island, an uninhabited island halfway between Chile and New Zealand, scientists found plastic items from Russia, the United States, Europe, South America, Japan, and China. They were carried to the South Pacific by a circular ocean current.

One of the reasons that plastic pollution is such a problem is that it doesn’t go away: “plastics are forever.” Unfortunately, plastic is so durable that the EPA reports, “every bit of plastic ever made still exists.” Once in the ocean, it is difficult, if not impossible, to get rid of it.  We may be able to pick up large pieces of plastic from inland waters, but the problem is that once in the ocean, plastics break down into microplastics, which are almost impossible to recover.

Sunlight, wind, currents, waves, and other natural factors cause plastic to break down into small particles called microplastics. Microplastics have been found in tap water, beer, salt and are present in all samples collected in the world’s oceans, including the Arctic. Microplastics have been found in every corner of the globe from Mount Everest, the highest peak, to the Mariana Trench, the deepest part of the ocean.

Plastic pollution has become one of the most pressing environmental issues.  It  is most visible in developing Asian and African nations, where garbage collection systems are often inefficient or nonexistent. However, the developed world, especially in countries with low recycling rates, also has trouble properly collecting discarded plastics.  Many countries do not have what they need  to prevent plastic pollution such as sanitary landfills, incineration facilities, recycling capacity and  proper management and disposal of waste systems.

Millions of animals are killed by plastic each year, including birds, fish and other marine organisms. Nearly 700 species of animals have been affected by plastics. Most of the animals die by entanglement or starvation. Seals ,whales, turtles and other animals are strangled by abandoned fishing gear and plastic six pack rings that have not been discarded properly.  Marine wildlife sometimes mistake plastic waste for prey, then most of them die of starvation as their stomachs become filled with plastic. Plastic waste also causes lacerations, infections, reduced ability to swim and internal injuries. In addition, the small size of microplastics makes it easy for marine life to ingest it accidentally.  Several chemicals are used in the making of plastic products which are known to cause cancers and can cause developmental, reproductive, neurological, and immune disorders in both humans and wildlife. When humans eat seafood,  they ingest some of the plastic contaminants that exist in marine life. This is considered a health hazard, and research continues in this area.

Tourism is also affected by plastic waste on the world’s beaches, and this causes a decrease in income for those destinations. Efforts to clean and maintain these beaches are very costly.

Individuals have to take responsibility for their own use of plastic and help increase awareness of the problem.  One thing everyone can do, no matter where you live in the world, is to limit your use of single-use plastics. Some examples include plastic bags, plastic utensils, water bottles, straws, cups, dry cleaner bags, and take- out containers. When possible, let businesses know they should use environmentally friendly products. Another way individuals can help is by properly recycling plastic products. Currently only 9% of plastic is recycled. Call Earth 911 if you are not sure about finding a place to recycle. People should also avoid using products that contain microbeads. These are found in body washes, face scrubs, and toothpastes and they easily enter our oceans through our sewer systems. Product labels including the words “polyethylene” and “polypropylene”  indicate that the product contains microbeads.

Another way to help stop plastic pollution is to go to a beach and clean up any trash you might see. You can do this on your own, with your friends or family, or with a local organization. You can even join an international event like the International Coastal Cleanup. To help make people more aware of this problem you can have people over and watch a documentary about plastic waste in the world’s oceans. Some examples include A Plastic Ocean, Garbage Island, An Ocean Full of Plastic, Bag It, Addicted to Plastic, Plasticized, or Garbage Island.  You could also make a donation to an organization that is working to eliminate ocean plastic pollution.  A few of these are the Oceanic Society, the Plastic Pollution Coalition, Algalita, and the Plastic Soup Foundation.

However, individual changes are not enough to help stop plastic pollution. We also need legislation to reduce and change plastic production and improve waste management. In addition, we need laws to make plastic producers take responsibility for the waste they create. At the federal level, in 2021, the United States proposed a federal bill called Break Free from Plastic Pollution Act that addresses the plastic pollution crisis. Legislation is also being introduced at the state level. Internationally, organizations and businesses are coming together to ask the United Nations to enact a global plastics treaty that would set global rules that would help control plastic pollution.

The threat of plastic pollution to our environment is a crisis that must continue to be addressed at many levels. There is still so much work to be done.   Individuals can do their part, but even more importantly, we need laws and global changes in policy if things are to improve.  Changes must be made in the production, disposal, and consumption of plastics. Solving this problem is essential to the health of our oceans as well as  marine and human life. This is an issue that cannot be ignored if we care about the well being of our planet.